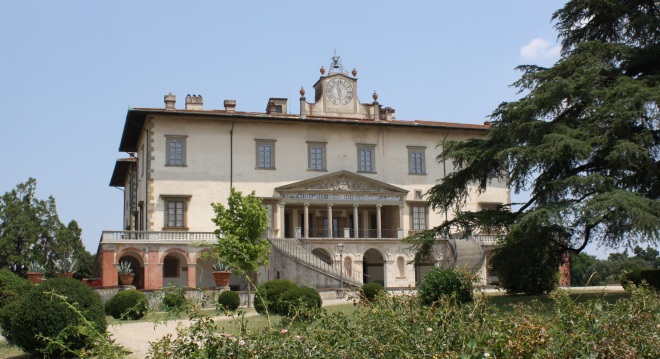 The curving staircase and clock are later additions to the Poggio villa.

The Medici villa at Poggio a Caiano was one of Alessandro’s favourite retreats. He lived here when he first came to Florence in 1525, and when he returned to rule the city in 1531 he often used it as a base for hunting.

Located in the countryside about thirteen miles from Florence, the villa was one of several Medici properties in the hills surrounding the city. Florence can be fiendishly hot in summer and country houses offered its wealthier residents an attractive retreat, as well as an opportunity to evoke the villa life of the ancient Romans.

Features of the Poggio villa today that would have been there in Alessandro’s time include the blue-and-white ceramic freeze from the facade, Francabigio’s fresco of Cicero returning from exile (an allegory of Cosimo the Elder’s return to Florence in 1434), and Andrea del Sarto’s fresco of Julius Caesar receiving tribute from Egypt (a reference to Lorenzo The Magnificent’s gifts from the Egyptian Sultan). Pontormo’s fresco of Vertumnus and Pomona would also have been visible in the 1530s.

The villa has been considerably changed since the sixteenth century, but remains a charming place to visit. It is one of the group of civic museums in Florence and its official website is here.